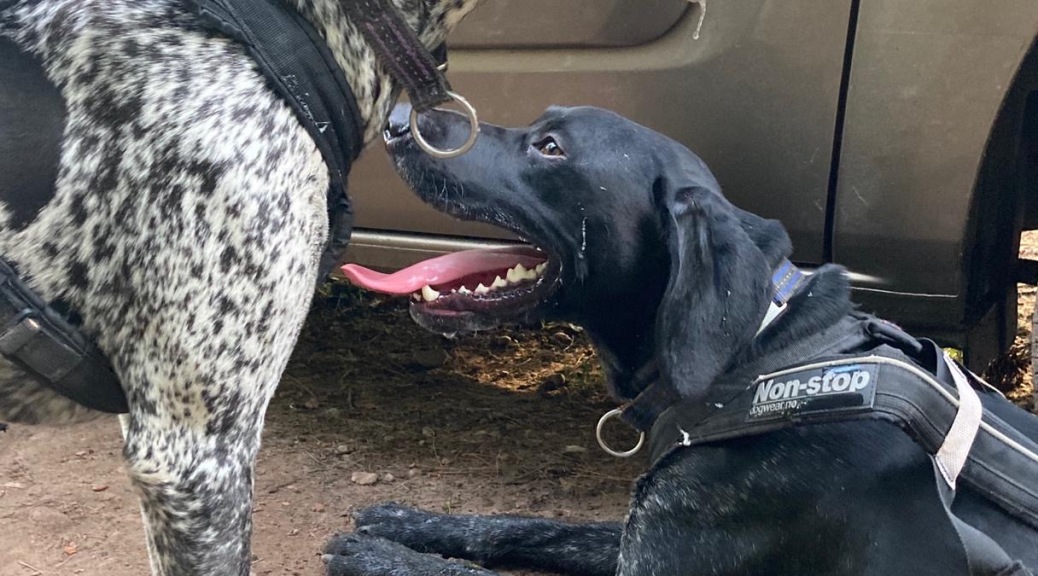 Almost exactly two years ago we published our post – Dogs don’t just die in hot cars (to date our most widely read blog post!). Amidst the usual summer “Dogs die in hot cars” campaigns we warned owners about the risk of heat stroke triggered by exercise, and shared a particularly heart breaking story from a trainer who lost his dog after a seemingly routine training session in mild heat. We can now share an update on this important message, including the dogs most likely to be affected by exertional heat-related illness – aka heat stroke following exercise.

In the second publication from our Dogs Trust funded Hot Dogs canine heatstroke research project we share more findings from the VetCompass Programme, identifying the key triggers of heat related illness in UK dogs. This study uses the same dataset reported in our previous paper, reviewing the veterinary records of over 900,000 UK dogs. We identified 1222 dogs that had received care for heat-related illness (including heat stroke, but also the milder conditions heat exhaustion and heat stress) and reviewed the clinical notes to identify the trigger of the event and the outcome for the dog.

Of the events where a trigger was recorded in the history, 74.2% occurred after exercise.

Exposure to hot weather alone triggered 12.9% of events and travel or confinement in a hot car triggered 5.2% of heat-related illness events. Other triggers included confinement in a hot building (e.g. a conservatory), undergoing treatment at a veterinary clinic or professional grooming parlour, and sadly becoming entangled in blankets or bedding.

The risk is year-round!

A key result from this project was the year-round risk of exercise induced heat stroke. Exertional heat-related illness affected dogs during every month of the year, with fatalities in January and every month between March-October.

In contrast, vehicular heat-related illness and environmental heat-related illness occurred only between March and September (the UK’s spring to summer period). This mirrors the results we reported earlier this month, that internal car temperatures exceed 35°C  between April and September . Vehicular heat stroke deaths occurred between March and July, adding further evidence to support our recent call to launch the “Dogs die in hot cars” campaign earlier in the year. Environmental heat stroke deaths occurred from May to September, and building entrapment fatalities occurred between June and September.

Which dogs are most likely to develop exertional heat stroke?

We previously reported that Labrador Retrievers had no greater risk than crossbred dogs for developing heat-related illness in general. However, this is not true for purely exertional heat-related illness, Labradors were twice as likely to suffer from the condition. The Chow Chow, Bulldog, French Bulldog, Greyhound, Springer Spaniel, Cavalier King Charles Spaniel and Staffordshire Bull Terrier were all found to be at increased risk of exertional heat-related illness when compared to the Labrador, with these breeds plus the Pug, Boxer, Golden Retriever and Border Collie at increased risk when compared to crossbred dogs.

Younger dogs (under 8 years old) were at increased risk of exertional heat-related illness, as were male dogs and neutered dogs. Overweight (both obese and large for their breed) dogs were also at increased risk, as were brachycephalic dogs in general.

This finding reflects the situation in humans, with young athletic men at greatest risk of exertional heat stroke, either following sport or after working in hot environments.

Which dogs are most affected by hot weather?

The breeds most at risk of environmental heat stroke – heat-related illness occurring after being exposed to hot weather alone without exercise – were the Chow Chow, Bulldog, Pug and French Bulldog. Again, dogs were found to have similar risk factors to humans for environmental heat stroke, with older dogs (aged 12 years or over) 3 times as likely to develop the condition.

The risk to flat-faced dogs

Flat-faced dogs are known to overheat at relatively low ambient temperatures (e.g. 21-22°C ), due to their limited capacity to cool via panting. Our findings suggest they are at increased risk of all types of heat-related illness, so efforts to change current breed standards and “breed to breathe” should be prioritised in the face of rising global temperatures.

How do you keep your dog safe?

The crucial thing is to know your dog.

Be able to recognise when your dog is getting hot – are they starting to pant, lying down more, seeking shade and cool surfaces to lie on. Know if your dog will run until they collapse, as these “eager to please” dogs like the Golden Retriever, Springer Spaniel and Staffordshire Bull Terrier are particularly at risk when out walking, running or even playing in warm weather.

If you own a flat-faced dog you need to be extra cautious in any situation where they could be exercising or exposed to a hot environment. Consider carrying water with you so you have a means of cooling them if you need to.

Dogs die in hot cars, but in the UK more dogs die after exercise, even during cooler months. Think carefully before taking your dog on a long walk in hot weather, and if you’re heading to the beach, make sure you can keep them cool and out of the sun.

Sharing our research into canine heatstroke and heat related disorders.